Home > News & Events > Aviation NZ Weekly Newsletters > 2013 > August > 9 August
Flying In Formation - -what does success look like ? We’re really focusing on this because it’s our big goal - creating a $16Bn sector by the end of 2016. Most external commentators think were hitting around 10% growth in our export sector and 5.5-6.0% domestically. We know achieving $16Bn by 2016 requires growth to be over 9% compounding pa. 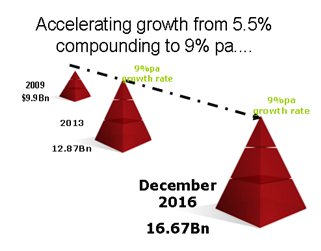 Leadership is essential  -getting the right leaders driving the change is critical. The first meeting of the reconstituted Board post the AGM took place this week with the Board electing Graeme Martin (click here) as chair.  He is joined by fellow Board members: Board/Aviation Council Hui 12 September The Board has reaffirmed we’re tracking in the right direction but sees a “mid point” hui as critical in getting ownership and buy in from the wider aviation community if we are to accelerate growth and achieve our goal.  They’ll be doing this on 12 September with the newly constituted Aviation Council and a number of other key stakeholders. At its essence it's critical that we are doing the “right things”, we're getting wide community buy in and we become a more forceful sector contributing to and creating wealth.

If you’re wondering who is on the Aviation Council, it comprises:
Aviation New Zealand developing and promoting the brand  - rebranding and rolling out our new name of Aviation New Zealand will be integral to the change process as one of the thing’s you’ve been consistently saying is that we have to get out and tell the aviation story far more vigorously. In doing that we want to be sure that we are absolutely reflecting the essence of the sector. As one of our Board members remarked, branding is not just about the colours and visuals – it’s the way you feel, live and dream. Speaking of which it’s been a particularly nightmarish week for a very large supplier of dairy products – so I’m sure you all get what we mean.

AEANZ successfully promoting CAR 147  - "the boots” joined the AEANZ committee this week for its first meeting post the AGM. It was great to be joined by MOT, the lead agency in accelerating the introduction of Rule Part 147.  Talk of having this change in potentially by Xmas almost had “the boots” rejoicing.  The commitment and determination is there but it is really up to industry to accept the proposition that it’s 147 now and syllabus and other CAR 43 and 66 rule changes in slower time.

A similar pragmatic approach is also appearing with the revamp of CAR 141. The message, if we want change: take on what’s doable and park the rest for another day. These changes alone could be worth $200-$300m to industry.

Making our flight training community more robust - we’ve got to make some big productivity gains because at the moment the pinch point in the supply chain (lack of B cat instructors) means instead of training upwards of 1000 pilots we can now only train around 600.  This is represents a loss of potential earnings for the New Zealand economy of around $175m pa.

It’s not about employing foreign pilots - there’s a lot of debate around about bringing in foreign pilots – first, let me say we don’t consider New Zealander’s returning home foreign pilots.  It is very clear that we simply don’t have enough jobs here in New Zealand to get everyone through the big career hoop of hour building. Unless the regulator removes that constraint then a large number of our young pilots must go off shore.

Secondly, this debate is not about foreign pilots – it’s about how we ensure that our supply chain is adequate to provide for retirements – generally at the top of the pilot “food chain”, and growth.  All the companies we have surveyed so far are looking at growing their business – some upwards of 15%.  That’s the kind of aspirational goal we don’t want to see choked off.

Lastly, getting the predictions right as to how many pilots we need is akin to “the boots” winning lotto – it ain’t going to happen in my life time!!!! But what we do know looking back over the last 20 years, we’ve produced around 200 kiwi pilots a year. The maximum numbers we can produce at 100% completion from the student loan pool of 450 EFTS is 150. So shortages of between 50 and 75 each year start to really compound.  It doesn’t happen over night – it’s like a creeping infection, unless treated, it can do some pretty harmful damage down the track.

I’ve been talking to you about skill shortage now for over a year. At the AEANZ meeting this week the Engineers expressed exactly the same concerns and think it’s a really great idea to go out towards the end of the year and do the same sort of survey.  We’ll take up that challenge.

And speaking of challenges Alan Peacock of Flight GSE has come up with another “big hairy audacious” proposition which is already gaining traction and that’s to run an auction with proceeds jointly to Aviation New Zealand and member rescue and emergency services trusts.  Basically the idea is to get members and others to donate products which we’ll auction …..so watch this space.  Anyone who knows Alan will attest to this man’s grit and determination plus his absolutely loyal support of all things aviation. Alan will have a small team around him – you suppliers it’s a great chance to get some free targeted advertising of your product.

On a very sad note we must record the passing of one of our life members Guy Robertson.  We have a photo of the young Guy sitting around the table at one of the very first aviation industry council meetings way back in 51. Guy was our oldest member at the ripe of old age of 96 – “a gentleman and champion of aviation to the end”. We pass on our sympathy to his family.

DoC 1080 RFT in Taranaki
Last week, we carried advice of the DoC RFT for the aerial application of bait in 3 separate control operations in South Taranaki.  GETS reference 39757.  DoC has now issued an updated description of the project.  The deadline for questions about the RFT is noon 16 August, bids close at noon on 19 August and service is to start on 2 September.

Visas for aviation cadets from China
We are talking to NZ Immigration Service about the process to issue visas for Chinese students coming to New Zealand for pilot training.  If you have some Chinese students who are likely to be submitting visa applications in the next couple of months, let us know.  We might be able to help smooth the decision making process.

China Aviation Market Research
We’ve been involved in market research in training opportunities in China in the past.  Later this month, we’re attending a workshop with NZTE on aviation opportunities in China in areas other than training.  A number of companies are across this research and the workshop already.  If you are committed to developing new business in China (are not a trainer) and would like to learn more about this work, let us know.

Domestic regulatory change
New HSE legislation on its way (click here, here and here) – we’re lobbying for a change vesting with CAA the competency to regulate all matters reported under Rule Part 12. This is important as it separates the more punitive HSE approach to safety from the “just culture” mantra adopted by aviation safety

Civil Aviation Act Review contact Bev Driscoll at the MOT for input B.Driscoll@MOT.govt.nz
If you are running scheduled operations please contact "the boots" reasonably urgently as we need to talk through the applicaiton of Part 9 B of the Act. Our concern is that many of you may not be aware of or familiar with this section of the Act which has some farily heavy associated penalties if found ot be in breech.

Government Agency relationships
We clearly have a close and constructive relationship with CAA and MoT and tell you about this work all of the time.  We also contribute to a ‘One Government’ aviation team.  This group is made up of CAA, MoT, NZTE, Ministry of Foreign Affairs and Trade and Callaghan Innovation.  These agencies are working together to align priorities, have agendas and 90 day action plans.  We’re going to a meeting next week and will let you know more afterwards.

Colour vision deficiency
We’re working with two student loan pilots who did everything right but ended up with a massive qualification on their medicals to the point where they can only fly productive work in Australia.   We are also working with industry and the regulator to ensure the process behind the new General Directive is fair open and transparent. We’ll also be seeking the evidence to be very carefully analysed as we understand that practices at home and overseas are very variable.  All parties agree this is about safety

Pilot medical charges – we’re anticipating a consultative document being released which scopes out a project looking at efficiencies from automation and the likes.  It’s a challenging area this because of privacy considerations and the generally sensitive nature of the information.

Airspace and Air Navigation policy review – this has significant implications for everyone.  The review is being drawn to a conclusion and good high quality consultation with Industry is essential.

Farewell to Mark Hughes  - in this case potentially slowing the plane down. He hasn’t gone yet but his day of departure from CAA is very close. Mark’s been one of the drivers behind the “new’ CAA and the introduction of SMS. “The boots” has had the privilege of seeing Mark work under the most difficult scenario a regulator finds themselves in and admired his professionalism and clear articulation of the issues. He will be difficult to replace and it will be very interesting to see who fills the two GM roles recently advertised.

Developing the Right Stuff
Our work is focused around developing a strategy to grow the right stuff  within industry.  We see this as very much a collaborative effort with our industry ITO ServiceIQ click here

We’ve had an interim acknowledgement from Minister Smith who is considering the DoC requirements for AIRCARE™. Our letter click here supports Minister Smith’s view that he is not the aviation regulator and compliance costs should be minimized. It also articulates a difference between concession and contract holders where the Minister’s duty of care is quite different.
AIRCARE™ ACCREDITATION process read here 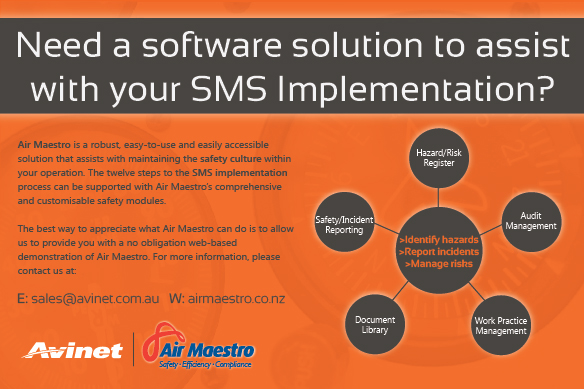 Travel Careers & Training classrooms available AKL Airport (opposite the IBIS – 10 minute walk to Domestic Terminal). Available on a causal or long-term basis. Also available in AKL CBD. Contact Guy Domett on 07 853-0294. John Sinclair says this is the best deal on offer in auckland!!!!

GSB Trade Card click here - if you are a member and you haven't got your card let us know. The savings more than offset membership costs.
OTHER AIA members deals